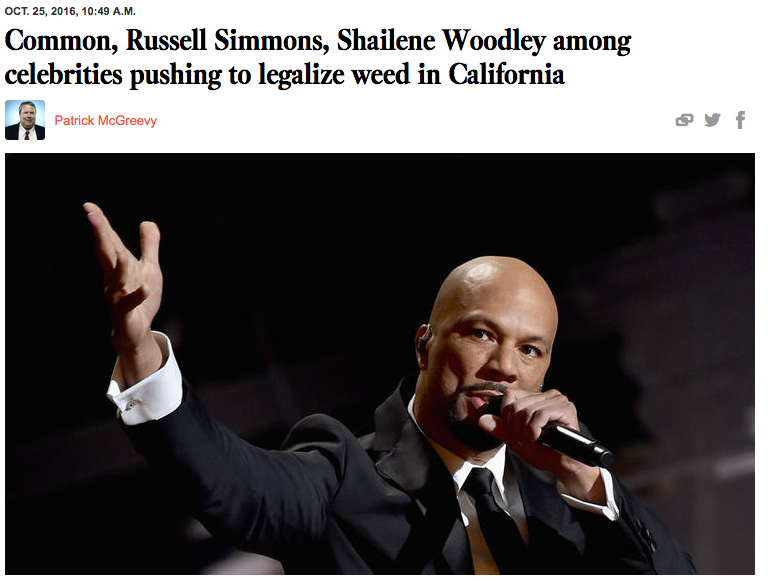 Top celebrities including Common, Tim Robbins and the author of the “Orange is the New Black” memoir are joining forces in what they are calling “Artists for 64” — the effort to legalize recreational use of marijuana in California.

Jay Z, who last week put out a video calling the war on drugs an “epic fail,” also signed on to the effort.

“In California, the question on whether to legalize marijuana for adult use is a policy change that will have a lasting impact on historically marginalized communities,” Glover, the star of films including the “Lethal Weapon” series, said in a statement posted on Artists for 64. “Marijuana laws have been used as a tool by law enforcement to racially profile, harass, intimidate and criminalize mostly young African American and Latino men for decades.”

“I am shocked and saddened by the harm that marijuana criminalization brings, especially for communities of color,”  Wilde said in a statement.

The campaign against Proposition 64 said Hollywood celebrities are not the most credible endorsers, charging they are out of touch with the reality of drug abuse in many communities in the state.

“Today the No on Prop 64 campaign did a press event in Fresno with faith and community leaders who know that the problems that recreational marijuana creates will impact these communities and neighborhoods across California not Hollywood,” said Andrew Acosta, a spokesman for the opposition campaign.

In a video produced by Dream Hampton and included on the website, former Golden State Warrior Al Harrington talks about how marijuana helped him overcome pain and inflammation during a staph infection and helped his grandmother with her glaucoma.

“I’m in recovery and don’t use marijuana, and my Christian faith is my rock when it comes to staying sober,” he said in a statement. “But I don’t believe people should be arrested for marijuana anymore. California can lead the country by voting yes on Prop 64.”

Drug Policy Action, an advocacy group backing Proposition 64 to legalize the drug for recreational use, paid for the site.