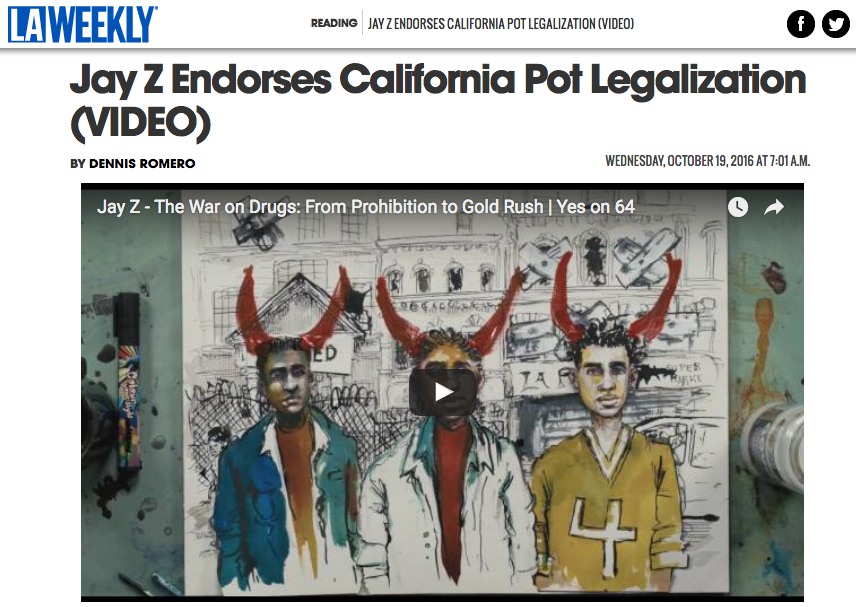 But perhaps the biggest name to say yes to the measure, which would make possession of up to one ounce of weed legit for those 21 and older, is legendary New York rapper turned L.A. resident Jay Z.

This week Hova endorsed 64 via a video that argues that the war on drugs has been a war on minorities, putting people of color behind bars at disproportionate rates, and culminating in an “epic failure.” He tells a brief but accurate story of the drug war, reaching back to Richard Nixon and pausing at his own childhood, when President Reagan “doubled down” on the battle. “Drug dealers were monsters,” he said.

Schools were defunded, the social safety net was dissolved, jobs were lost, big cities were struggling. “Young men like me who hustle became the sole villain,” Jay Z said. “The war on drugs exploded the U.S. prison population disproportionately, locking away blacks and Latinos.”

These are all key points made by the video’s producer, Drug Policy Action, the political arm of the Drug Policy Alliance. The group is endorsing 64 in a big way and has made the minority vote — and racial justice — crucial parts of the campaign to legalize cannabis in California.

Meanwhile, the Drug Policy Alliance says a live debate on Proposition 64 titled “Marijuana: To Legalize or Not?” will take place Nov. 1 on the Santa Monica Pier. Actor Alan Thicke will moderate the 6 p.m. event; Karen O’Keefe of the Marijuana Policy Project will speak for Jay Z and other legalization backers, while representatives of Californians Against Legalizing Marijuana (CALM) are expected to present the opponents’ side.